Pry the floppy disk from the bottom corner of the screen.

Objective: Find a computer that can play the disk

After picking up the floppy disk, you receive a strange call.

We play the game so that we can watch you. Perhaps you will play to know what we know.

We are the Swarm. We know the truth.

Find a computer capable of playing this ominous floppy in the Kaidan area.

The disk is a floppy. Most modern computers no longer have floppy disk drives.

A few groups in Kaidan are alive and kicking, still chugging away with their computers.

One of the groups is far more likely to be using computers than the other.

Head to the Jingoku no Yu Bathhouse. The reception desk has a CRT computer (205,785) capable of playing the floppy disk with ease.

Note: If you cannot find or do not wish to use any of the appropriate computers during this mission, the following is available at any time during Choose Your Own for use:

Insert that floppy disk and see what hides inside.

Objective: Locate the next floppy disk

The Swarm calls again when the game is inserted.

Make the right choices. See where the story takes you. We are the Swarm. We are many.

Using the floppy disk causes a game to appear.

Note: Multiple commands may trigger the appropriate events during a Text Adventure. Commands given throughout this guide may be substituted for a variety of synonyms.

If you require aid completing Just Escaping, the following is a list of commands in order:

Go to the next location.

The Swarm says to see where the story takes you.

Where the story ends is where it takes you.

Head to the Lobster Trap in Kingsmouth, where the letters of love were written on the cement behind the building on the pier (570,365).

Pick up the disk. It is now yours.

Objective: Play through the next interactive story

Picking up the disk causes a text from an unknown sender to appear.

Act 1, Scene 2:
Along the shore the cloud waves break,
The twin suns sink behind the lake,
The shadows lengthen,
In Carcosa

Strange is the night where black stars rise,
And strange moons circle through the skies,
But stranger still is
Lost Carcosa.

Find another computer capable of playing the floppy.

Look around Kingsmouth for a working computer.

It has to be a place with still-working electronics.

It may have been mentioned in the text adventure.

The Police Station has a floppy disk reader at Helen Bannerman's desk (185,320). Commandeer her computer for your games.

Use the reader. Insert that disk for another game.

Objective: Find the clues to the next location

Look for whatever may lead to where to go next.

Playing through the text adventure would be a good idea.

The Thing's the Play

Commands to the text adventure The Thing's the Play are listed below:

As with the first adventure, head to the last location mentioned in the game.

You performed and ultimately died at a particular place... after breaking in.

Once inside the Albion, the Swarm sends another ominous excerpt from the play.

Act 1, Scene 2:
Songs that the Hyades shall sing,
Where flap the tatters of the King,
Must die unheard in
Dim Carcosa

Song of my soul, my voice is dead,
Die thou, unsung, as tears unshed
Shall dry and die in
Lost Carcosa.

To perform in the Albion Theatre, the stage must be booked.

Talk to the Booking Manager at the desk to rent the stage. Oddly, it seems the fees have already been paid for. Go backstage to prepare your performance.

You will appear backstage. Nearby behind the stage is a table. Theatre control system tablets sit in a box. If you do not already have an Albion Theatre Control System from a previous time backstage in the Albion, take one from the box.

Show the patrons in the audience what true art is all about.

You performed in The Thing's the Play as well.

The Thing's the Play focused heavily on the King in Yellow.

Follow the steps your character in the text adventure took.

A CRT computer sits active nearby, should you at any time need a refresher on your performance.

Place a yellow gradient background, a center spotlight, open the curtain, and give a bow within the spotlight.

Should you have trouble navigating the Albion Theatre Control System, these are the appropriate commands to set the stage for your performance.

Please note that the Yellow Gradient's command number may differ based on the Theatrics and Backdrops a player owns:

Upon giving the performance of your lifetime, masked figures will appear in the balcony. Head to them.

Go up the stairs and approach these fiendish figures.

When you get close, they vanish, leaving a message on a cushion for perusal. 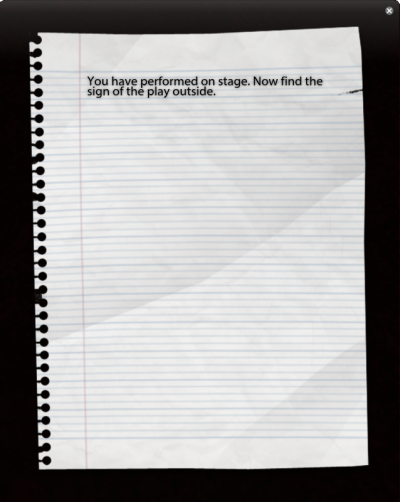 Objective: Locate the next floppy disk

Heed the message and go to the next floppy disk's location.

You are looking for the sign of the play.

There is a special sign - the symbol used throughout the play and text adventure.

Objective: Play through the next interactive story

As with the stories before, find a computer capable of playing the story.

You can use any computer previously used for the text adventures should you have trouble finding one.

Should help be required to complete Witch Feast, the following is a list of commands in order:

Take note of all of the clues in the Witch Feast text adventure to find the next location.

The Witch Feast adventure mentions that 'nothing grows in these besieged farmlands'.

Find a magical woman in the Besieged Farmlands.

Travel to Cucuvea and her tree (940,545). The wise owl has an old computer awaiting you.

We know the crimes of your masters. Throughout history.

We are the Swarm. We are not pleased.

Use Cucuvea's computer to see the message left behind by the swarm.

Upon using the computer, the G.H.O.S.T. Interface will appear with a message from the Swarm.

You can use the 'hint' command in the computer.

Computer's Hint: Place the name of the hag in the glowing cauldron.

A name was written in cauldron in the Witch Feast text adventure by the children.

Objective: Locate the next clue

Make way to the next location outlined in Cucuvea's computer.

Go to the town where the dead never lie. Go to the door lit by a torch on its right. Enter. We are the Swarm. We are waiting.

Travel to the town.

The story then ends at the siblings' home.

They are in the Besieged Farmlands while in Baba Yaga's hut.

South of the Farmlands is the Shadowy Forest.

Dead never lie if they are undead or otherwise deathless.

Go to Iazmăciune, where the Deathless roam.

Find a door with a lit torch on its right.

A lone desk sits in the building. Waiting.

Objective: Put on the blindfold

Entering the room with the lone table results in a very worrisome phone call.

We have something to show you. Put on the blindfold, and we will proceed.

The choice is yours. We are the Swarm. We see you.

Pick it up. Place it on.

Putting on the blindfold was a terrible idea. The Swarm has taken you to an Abandoned Asylum.

When you get up from the dilapidated bed, the door to the room will open.

Exit the room to the desolate hallway

At the very end of the hallway is an open office where the phone rings forevermore.

Answering the phone results in yet another ominous message.

See where the story takes you. Absolution is pain. Growth looks like destruction.

Sometimes, the only way out is to die. Time to play.

We are the Swarm. We are keeping score.

By the phone is a CRT computer with a floppy disk already in the drive.

The game One Way Out is a short adventure. A potential solution is offered below:

Pry the disk from the USB floppy disk reader.

Objective: Search for a way out

A room was on the left after the stairs.

Go down the stairs to the main lobby. On your right, a door will open.

Head to the the dismal, dark hall and the first room on the left.

Enter the room. Upon doing so, the door will close.

Just like in the story, there is a lone light. The mystery object sits beneath it.

Objective: Decide what to do with the completed disk

Once you awaken from the fiendish trap, you find yourself in Seoul a text from the Swarm.

Thank you for humouring us. We like you. Gifted. Imbued. But do you know what the factions do when a bee does not choose a side? There is a place called the Hive. It's a prison. Any of us without a master are locked away. No due process. No appeal. We vanish forever. How long before your masters turn on you? Now you know what we know. You have a disc. What you do is your choice. Life is a choose-your-own-adventure. Who do you choose? We are the Swarm. We are watching.

The disk sits in your inventory.

Right-clicking the disk will give the option to forward it to your faction or not.

Do you keep it for yourself or send it to your handlers?

The choice is yours.

Text received if you keep the disk for yourself:

We are impressed. You choose your own. This is an invitation to doubt. Tomorrow you'll still be in your organization, but maybe you'll look at it with fresher eyes. Be careful. They are good at secrets. They might already know your little rebellious act. No matter what they promise you, remember the Hive. Remember your brother and sister bees are trapped there. But remember that no matter how monolithic they seem, they cannot catch us all. We are the Swarm. We are growing.

Text received if you send the disk to your faction:

We are not surprised. You chose your masters over your own. You are one of them. But remember the Hive. No matter what they promise you, how much they reward you, remember that your brother and sister bees are imprisoned. Remember that you're one bad day away from being put there. And remember that no matter how monolithic your organisation seems, you can't catch us all. We are the Swarm. We are growing.

Comments
More Comments
Are you enjoying our guides?