The Equinox is upon us!

With Avalon's shields strengthed in the equinox, the Druids of Avalon have come out of their hidden island to Agartha with the assurance that their home will be safe in the mean time.

The Envoys of Avalon event is a biannual event occurring during the autumnal and vernal equinoxes and consists of a unique seasonal Legend list and the side missions The Equinox and The Equinox - Further Testing.

Various Envoys of Avalon can be found wandering the Hollowed Halls of Agartha during this time, while the main druidic representative Fearghas Abernathy stands tall by the very Seed of Life itself (565,190).

By the Seed of Life in Agartha's Hollowed Halls is a Quartermaster of the Envoys of Avalon (565,190) who works alongside Fearghas Abernathy and the other druidic Envoys of Avalon on their duties into the World Tree.

No achievements are required in order to buy from her.

The Envoy of Avalon Quartermaster lingers in Agartha for two weeks after the Equinox has ended and the other druids have left to return to Avalon.

The following items are sold by the Envoy of Avalon Quartermaster during the Envoys of Avalon event:

* Base price. The cost of the Attire of Avalon decreases by 36 Aurum per wave of Occult Defence completed during the Envoys of Avalon event.

Each day while the Envoys of Avalon are present brings with it a unique seasonal Daily Login Reward available regardless of patronage status. Claimable on every character on an account, these rewards are in addition to the normal Daily Login Rewards. There are a set number of rewards and missing a day won't result in missing the reward for that day, as only claiming a reward will allow you to move forward in the list. There are 14 distinct seasonal login rewards for the Envoys of Avalon. Unlike other seasonal events with special Daily Login Rewards, there are no extra days for leeway. Be sure to log in and claim your rewards every day!

There are no seasonal Daily Login Rewards for the 2020 Autumnal Equinox. 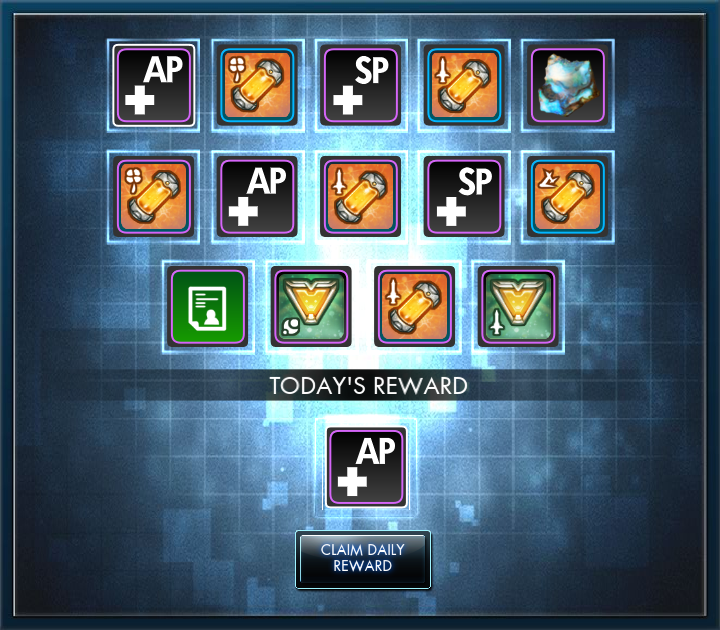 The following items were rewarded for logging in each day throughout the 2020 Envoys of Avalon Vernal Equinox:

Fearing for the worst, the Druids of Avalon have collaborated with the Council of Venice to simulate an occult disaster at Stonehenge itself in the form of a new type of scenario: Occult Defence.

Their Envoys seek volunteers to participate in the Occult Defence Scenario, offering rewards to those who do so while the Druids are present in Agartha for the Equinox.

During the Equinox, the Envoys of Avalon award those who participate in the Stonehenge Occult Defence Scenario.

Acquired from Fearghas Abernathy in front of the Seed of Life in the Hollowed Halls of Agartha (565,190), The Equinox is a side mission requiring the completion of 10 individual waves of an Occult Defence Scenario. These waves not be consecutive, so as many scenarios can be run as needed to complete this task. The Equinox is not repeatable but rewards players with a piece of the Druids of Avalon legend and 3 Spoils of the Equinox.

The Druids of Avalon appreciate your cooperation.

Occult Defence scenarios can be completed in solo or multiplayer form, and the only requirement for the first wave (Wave 1 [Elite 1]) is that any player attempting to enter the scenario be Level 50. From there, waves listed in the Activity Finder are every other wave, resulting in odd numbered waves. Queueing for waves 3 (Elite 2) - 9 (Elite 5) requires either the player have the required Item Power for the corresponding Elite difficulty level or have achieved that wave by playing through a scenario. Waves 11+ can only be entered through the Activity Finder after having successfully reached the wave before them in a scenario.

A wave consists of a series of mobs all attempting to attack the Hagstone or otherwise hinder you. They spawn from purple portals found along the perimeter of Stonehenge. A variety of enemies exist, each with unique abilities to deal with.

Each wave has a duration timer of 3 minutes and 20 seconds. Upon reaching 00:00 time, a boss will appear and the clock will stop until all remaining mobs as well as the boss are defeated.

The Hagstone sits in the center of Stonehenge, and must be defended throughout the scenario. Should mobs come close to the center, the Hagstone begins to lose Integrity, its health. Once it reaches zero Integrity, the Scenario ends and rewards will be given based on the last wave successfully completed, if any.

Certain mobs, when killed, will cause a powerup buff to spawn at the Hagstone, as signified by a spiraling blue magic released upon the mob's death. These buffs can be a great boon when used!

Once a wave has been successfully completed, a player is given the option to choose to continue to a higher wave or to collect your rewards. The time between waves is infinite, allowing as much time to pause or relax as a player needs.

As difficulty ramps up through a progression of waves, more challenging enemies will appear and bring with them the need for new strategies to consider, in some cases entirely new enemy types will make themselves known in the higher waves.

Should the player choose instead to receive their rewards, the scenario will end and a Reward Chest will appear.

A legend category is associated with the Occult Defence Scenario; however, the legend is not part of the Envoys of Avalon event and as such, is accessible permanently year-round. This legend is the Stonehenge Simulation.

Upon voting to stop and collect rewards instead of continuing on to the next wave in an Occult Defence Scenario, a Reward Chest will appear requiring 1 Scenario Key to unlock and receive the loot within.

As the Envoys of Avalon request volunteers for the Stonehenge simulation scenario, the scenario rewards will inevitably be earned to some extent while participating in this event.

The following are potential rewards available from the Reward Chest of an Occult Defence Scenario.

Distillate experience and quality scales with difficulty reached in an Occult Defence Scenario. In addition, the number of Distillates depends on how many waves were accomplished in a single scenario run.

Druidic garments can be gained from the Envoys of Avalon. They can be previewed in the Dressing Room. As of the Vernal Equinox 2020, there is not yet a seasonal sticker icon to identify them with.

The Attire of Avalon - Outfit is acquired in two ways. It is rewarded in its entirety for completing the Envoys of Avalon achievement, "The Once and Far Future King" for completing 100 waves of Occult Defence Scenarios during the event.

Each Occult Defence Scenario wave completed during the Envoys of Avalon event reduces the cost of the Attire of Avalon by 36 Aurum, making it increasingly more cheap to buy up until the point where it's awarded for free from "The Once and Far Future King".

All pieces of the Attire of Avalon differ between Male and Female characters. In particular, the Attire of Avalon chest, legs, and feet differ drastically moreso than the jacket. Additionally, the Male and Female jacket and legs are patterned oppositionally to each other - where the male version of the jacket is a solid green, the female is plaid, whereas the male legs are plaid and the female legs are a solid green.

The Envoys of Avalon have brought a sprint exclusive to their Equinox celebration!

Display your prowess with the arcane with the Arcane Gravity sprint! Rewarded randomly from the Spoils of the Equinox awarded for completing The Equinox and The Equinox - Further Testing side missions.

Received in lieu of Agent Dossier: Diviciacus as a Seasonal Daily Login Reward should you already have him as an agent when claiming it.

Achievement: Knight of the Round Henge

Some items are only available for purchase during the Envoys of Avalon event.

An apple away keeps the plague doctor away! These nutritiously delicious fruits increase out-of-combat health regeneration when eaten and can be purchased in stacks of 50 Apples from the Envoy of Avalon Quartermaster in Agartha (565,190) for 250 Marks of Favour.

Apples themselves are not event-exclusive despite the 50 Apple stack being event-only, as single apples can be purchase throughout the year from the lovely custodian Platinum Chef (530,185) within Agartha's Hollowed Halls for 2 Marks of Favour per Apple.

Eating an Apple activates the animation of eating said apple.

No matter the size, the Envoys of Avalon have event-specific loot available to enjoy!

Spoils of the Equinox

Of the items available in the Spoils of the Equinox, the Arcane Gravity sprint and Cernunnos Antler Fragments talisman are all exclusive to the Spoils. The other items are available through other means at varying levels of difficulty and accessibility.

The Agent and Special Agent Dossiers for Fearghas Abernathy are not specific to the Envoys of Avalon event and can alternatively be obtained by purchasing them from Dr. Caligari in the Hollowed Halls of Agartha (600,200) for 1000 Anima Shards each after acquiring the requisite Occult Defence achievements. It is nonetheless far easier to acquire when available through Spoils of the Equinox. See the Fearghas Abernathy Dossier page for more information!

The Envoys of Avalon bring with them tasks to achieve using Occult Defence scenarios during the equinox. All associated achievements can be completed over the course of one or more equinoxes - the Druids are patient!

The Once and Far Future King

Knight of the Round Henge

Help the Envoys of Avalon by completing both "The Equinox" and "The Equinox - Further Testing".

Complete 6 waves in a single Occult Defence scenario in a group of 5 during the Envoys of Avalon event.

The Envoys of Avalon have their own stories and histories in the annals of time and the Buzzing, bringing with them new legends to learn in their wake.

The Druids of Avalon

The Druids of Avalon Legend is available and up-to-date for the equinox!